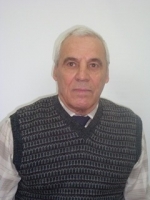 Professor of the Department of Photonics and Laser engineering ,Doctor physico-mathematical science, Professor

Head of department
Department of Quantum Electronics and Nonlinear Optics Institute of Radiophysics and Electronics O.Ya. Ushikov National Academy of Sciences of Ukraine.

2006-2011 years – Development and application of quasioptical and optical methods and methods in radiophysical studies in the terahertz region of the spectrum. (Cipher “Oplot”).

2011-2016 years – Development of methods and methods of optics and quasioptics for establishing regularities and features of interaction of terahertz radiation with physical and biological objects.
(Cipher “Halo”).

Laureate of the State Prize of Ukraine in the field of science and technology, 1974.

He has more than 200 publications, including 2 monographs.

Has 16 patents for inventions.